DNA sequencing is complex stuff, frequently used in biological research. Having worked in a hospital in the past and having been around lots of lab equipment I can say that sort of stuff is generally gigantic and very expensive. Now, a company called Oxford Nanopore has a new DNA sequencer that is tiny enough to be held in the palm of your hand and plugs into the USB port on your computer. 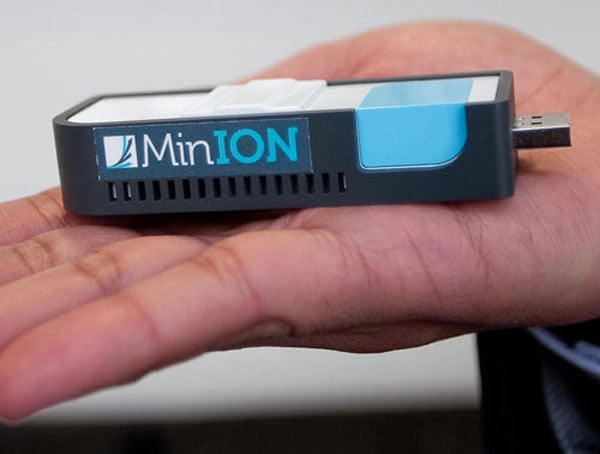 The device is called the MinION. I would imagine that the samples of DNA still need to be prepared in the lab, then the samples would be dropped into its little sequencer chamber where they be sequenced continuously as a DNA strand is pulled through a small hole and inside the machine. The sequencing requires some sort of enzyme solution and inside the device is a small bio-mechanical sieve.

MinION will cost about $900(USD) when it comes to market sometime later this year, however it sounds like that it’s a disposable device which would be used for just a single experiment.

I wonder if this tiny device is the start of a society like that in the movie Gattaca where DNA determines everything you can do. Probably not, but this should make it much cheaper for companies and educational institutions to get into DNA sequencing, assuming the device is accurate.