I think that generally when most of us imagine a paleontologist, an image of someone in a pith helmet, digging in the dirt with trowels and paintbrushes comes to mind. A paleontologist at Drexel University has a project he is working on which doesn’t involve dirt or paintbrushes, and it may well be the most amazing thing to happen to dinosaurs since the giant asteroid killed them off. Dr. Kenneth Lacovara is teaming up with mechanical engineer Dr. James Tangorra to reproduce fossilized dinosaur bones using a 3D scanner and a 3D printer. 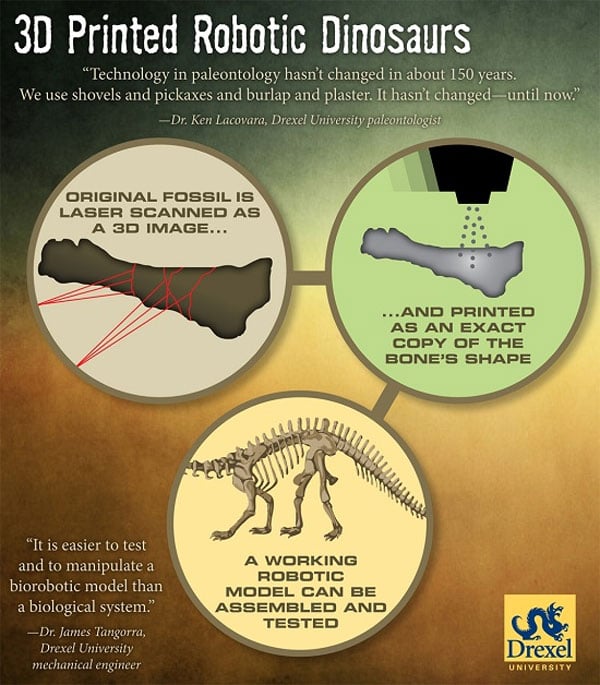 The 3D printed fossil bones will initially be used in museums and for educational purposes. The truly awesome part about the 3D printed bones though is that the two researchers plan to eventually use them to build a robotic dinosaur. The duo will start by constructing a robotic leg complete with muscles and tendons. Once that is finished, they will start a truly awesome task.

Their ultimate goal is to create a complete robotic dinosaur so they can study how the dinosaurs moved around the earth millions of years ago. How awesome is that?! A massive robot dinosaur would be so cool. There’s no word on what dinosaur they would try to recreate, but I would assume it would be a smaller dinosaur.