One Piece Slingshot Spear Gets Real, Courtesy of Joerg Sprave

If there’s one guy on the internet that we love around here, it’s master of all things slingshot, Joerg Sprave. The man has built all kinds of crazy rubber band powered weapons, and his latest is pretty great. It’s based on the Kabuto, a combination spear/slingshot wielded by Usopp in the Manga/Anime series One Piece. 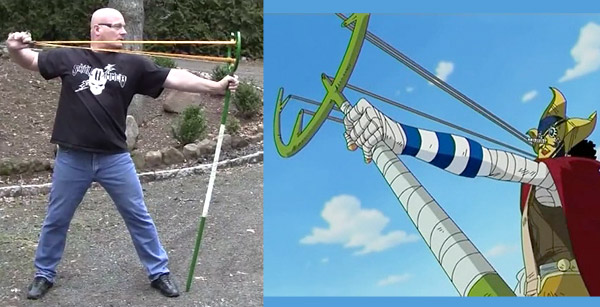 Sprave’s version of the weapon has a four-point slingshot, mounted on a staff wrapped with grip tape. The stick has a deadly, sharp point on the end, which can be used not only as a weapon itself, but to hold the staff into the ground. This is an improvement over the original design, in which Usopp basically holds the weapon in mid-air, stabilizing it with his hand. It’s really quite an effective weapon, as you can see in the video below:

I certainly wouldn’t want to be the recipient of either end of this nasty weapon. Though I think I’d rather take my chances with a bruise from a 20mm steel ball versus a puncture wound from its stabby end. Though I guess it depends on how far away you were when he fired it. Either way, they both sound pretty nasty ways to go.