Electronic musicians and DJs are always on the lookout for cool new ways to control their music. The Midi Fighter 3D looks like it could be nifty new music-making tool to add to your arsenal. 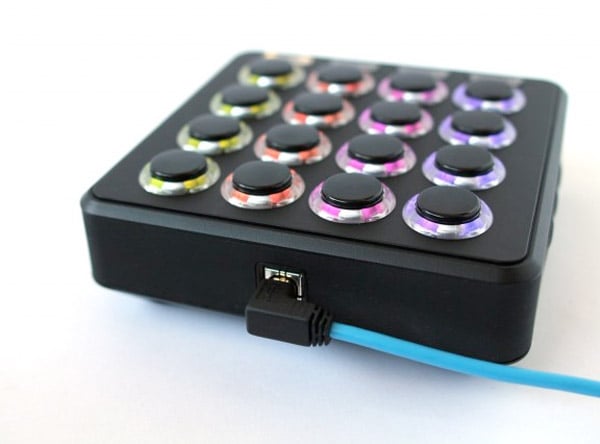 This compact box offers a 4×4 grid of arcade-type push-buttons, each backed with colorful RGB LEDs to provide visual feedback. But there are a ton of button controllers out there. What makes the Midi Fighter 3D special is its built-in motion sensor technology. Under the hood, it’s packing a gyroscope, accelerometer and compass, which allow musicians to use the position, angle or direction of the controller as inputs for MIDI software as well. Just plug it into your computer with the included USB cable, load up your favorite music software, and you’ll be all set.

It’s also got a set of bank-switching buttons on top, so the grid can be reconfigured on-the-fly to one of four different configurations and color schemes. In addition to the 16 buttons on top, the controller has six side-mounted buttons which can easily be pressed while you’re moving it around. They also plan on offering a hand strap, which will allow you to easily hold it in your hand without worrying about it flying out in a mad musical fit.

The MIDI Fighter 3D is being made by DJ Tech Tools, who expects to release it this April with a retail price of $249 (USD). You can reserve one now over on their website.