How far can you throw a paper airplane? Not very far I’m guessing. At least not compared to this guy. You have to throw it just right. Too hard and it takes a nosedive, too light and it doesn’t go anywhere. And it’s not just about the design of the airplane. It takes a quarterback’s arm to break the record for throwing a paper airplane and one has done just that. 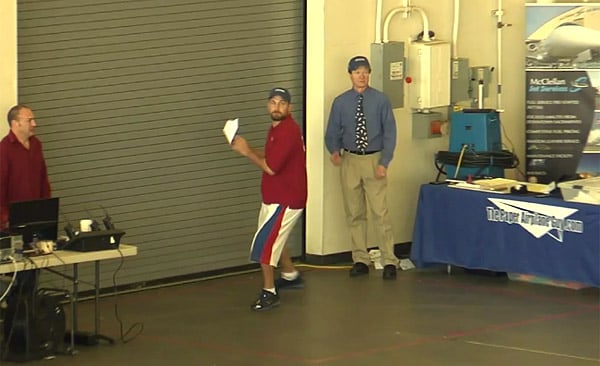 I had no idea that the Guinness Book of World Records even had a record for the longest paper airplane flight. Then again, I always thought it was about the quality of the airplane, but now I realize that launch power is definitely part of the equation.

The guy who just broke the previous record by 19 feet and 6 inches is a former quarterback. Joe Ayoob threw his airplane 226 feet and 10 inches last Sunday in an airport hanger at McClellan Air Force Base. The previous record was 207 feet, 4 inches. I guess this proves that quarterbacks can throw just anything like a pro.

Of course, you could always cheat if you want to beat his record.

[GrindTV via Obvious Winner via Geekosystem]