If you’re a fan of flying remote control toys, I bet you remember the original AR.Drone. Parrot has a new version of the AR.Drone that will launch soon called the AR.Drone 2.0. It looks very similar to the original with a few notable exceptions such as the addition of a 720p video camera, improved flying precision and increased altitude limits. 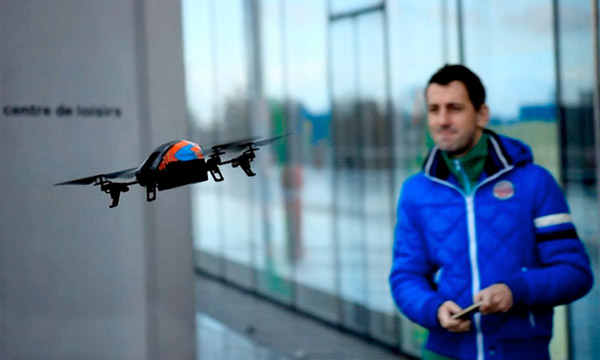 Version 2.0 is still controlled using the iPhone, iPad, or Android devices using a companion app. It includes the quadrotor AR.Drone 2.0 device, an indoor hull, an outdoor hull, charger, and the battery. The battery is a lithium polymer unit, and the AR.Drone 2.0 can use the battery from the original if you have it.

The AR.Drone 2.0 has an improved stabilization system that makes it even easier to control than the original, and even has a single button “flip” control. It records photo and video and stores the media directly to your control device, and the video camera can be used as a FPV controller so you can see exactly where you’re flying. Flying range is about 165 feet, which isn’t too shabby, but you won’t be pulling of mile long journeys unless you chase along with it.

U.S. pre-orders started today over at Brookstone for $299.99, and the AR.Drone 2.0 ships on April 9, 2012. UK and Europe should be getting theirs soon – you’ll need to check Parrot’s website for more info.

[UPDATE 3/8/2012: Brookstone has informed us that the April batch is now sold out, but they are taking orders for three colors of AR.Drone 2.0 for early May delivery.]