We may someday have a weapon that will safely and effectively combat noise. Called the SpeechJammer, the device uses a technique called Delayed Auditory Feedback (DAF) – it replays back the target’s speech with a slight delay. This messes with our brain and makes it difficult for us to continue speaking. You could of course achieve the same silence by shooting someone with a real gun, but that’s way too drastic for librarians. 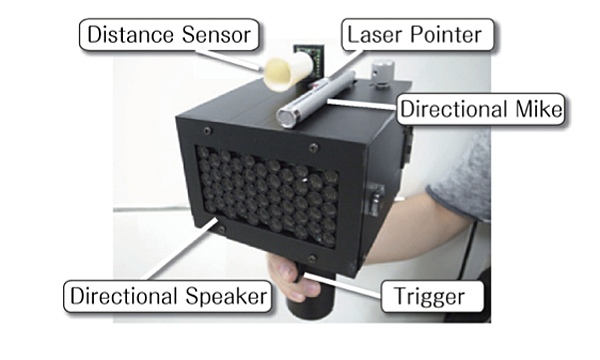 The SpeechJammer was invented by Kazutaka Kurihara and Koji Tsukada. As you can see in the picture above, it has a directional microphone to capture the target’s speech, and a directional speaker to play the captured sound back. The distance sensor uses the laser pointer to calculate the distance of the target. The on-board computer needs the distance to ensure that the delayed playback is consistent. Here’s Mashable with more on the device:

And here’s a video from a Spanish talk show that shows DAF in action. The musician wears a pair of headphones and his voice is played back to him. He manages to sing, but the technique did have an effect on him:

The funny thing is, DAF doesn’t work if you stutter. In fact, it has the opposite effect, making stutterers speak better. That’s why there are programs – and even an iOS app – that cause DAF. I guess we’ll just have to deal with noisy stutterers with a good ol’ punch to the face.