Robot Teaches Itself to Walk, Just Not Very Well

I recently showed you a video in which a Gundam mech taught itself to walk using some sort of “genetic algorithm”. Around the same time, it turns out engineers have been giving real robots the tools they need to walk on their own. 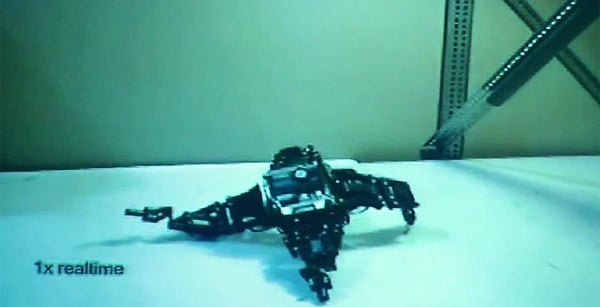 In the video below, Cornell University professor Hod Lipson demonstrates a robot which starts out with know knowledge of its own form or function, but eventually manages to walk. The bot first moves its motors randomly in order to try and assess what its shape it might be. Then it tries to figure out which actions cause the most disagreement between its predictions. The result of this logical process lets it quickly whittle down the theories it can refute about its form and function. Eventually, the robot figures out what it looks like. Once it’s determined shape it is and how many legs it has, another model kicks in which it uses to try and move forward based on its form.

Watch as this quadruped robot as goes from flapping about on the ground to actually moving:

As you can see from the video, the robot doesn’t exactly achieve the spider-like gait you’d expect. As a matter of fact, its walk is pretty primitive and inelegant. However, the fact that it eventually figures out how to move forward at all is pretty cool.

You can check out a more detailed video of the robot as it learns how to walk over on the Cornell Creative Machines Lab website.