If there’s one thing that the Internet has forced companies to do is to get a little more creative with their marketing. Instead of crappy old TV commercials, vendors are vying for our attention with publicity stunts they hope will go viral online. This recent campaign from Mercedes-Benz is one of the more intriguing viral campaigns I’ve seen in a while. 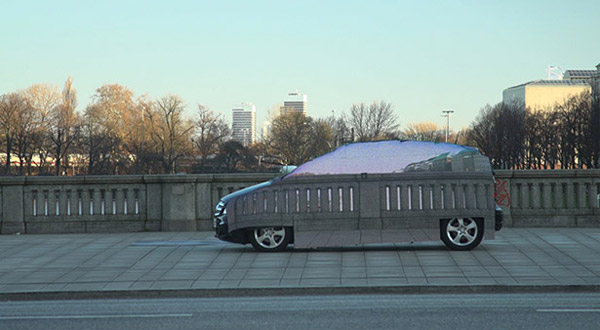 To promote its zero-emission F-CELL fuel cell technology, Mercedes funded the creation of a vehicle that could be turned “invisible” – in reference to the vehicle’s limited impact on the environment. They pulled it off by wrapping their ride in flexible sheets covered with a grid of LEDs. A camera on each side of the vehicle then relays what it’s seeing to the other side of the minivan, creating the illusion of invisibility. You can see the invisible Mercedes in action in the video clip:

It’s a pretty cool concept, though you have to stand back pretty far and be viewing the vehicle at an exactly 90-degree angle for the effect to work. I’d love to see someone work out higher resolution version of this illusion, along with head tracking so it would work no matter what angle you were standing at (like Mission Impossible: Ghost Protocol’s invisbility shield.) Still, Mercedes’ promo beats your average crummy ad campaign, IMHO.

To see some behind the scenes photos from the shoot, head on over to Mashable and check out their gallery.