Last week, we told you about an astronaut aboard the ISS who built a LEGO model of the ISS in space. Turns out those aren’t the only LEGO bricks to leave this Earth and head toward space. In loving memory of the Space Shuttle program, YouTube contributor Vinciverse sent his model Space Shuttle into the skies via weather balloon. 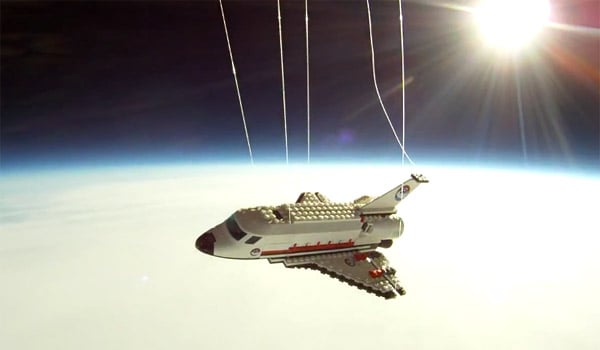 This straight-from-the-box LEGO Space Shuttle model might not be anything that complicated, but then again I’m impressed that it didn’t rip into pieces as it ascended above the clouds to an altitude of nearly 22 miles. Set to a lovely musical soundtrack by Radical Face (and a little Richard Strauss,) watch this little LEGO Space Shuttle fly high above our planet, through the clouds, and into the stratosphere.

There’s a bit of an edit in the middle of the video, but I presume that’s just because watching the entire journey skyward would have been pretty time-consuming. As a matter of fact, Vinciverse says the model took nearly 2-1/2 hours to hit an altitude of about 35,000 meters (~114,829 feet), propelled by a helium-filled meteorological balloon. The whole flight was captured with a GoPro Hero camera, which was eventually located with a Spot GPS tracker.