We’ve all heard countless times how simply petting an animal can decrease stress and help improve a person’s state of mind. But what if you’re unable to take care of a real pet? There have been plenty of attempts to create robotic animals over the years, but none of them have really succeeded at providing the same feedback as a real animal. Now, researchers at the University of British Columbia are working on a robotic pet which might come closer to the real deal than ever before. 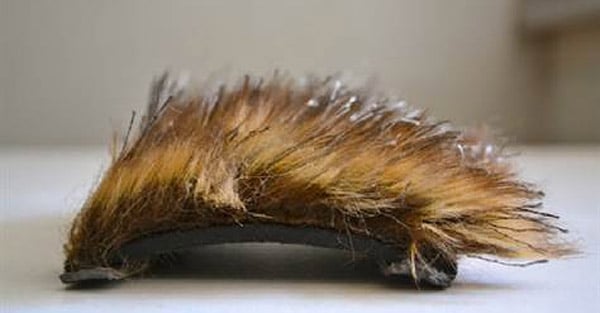 UBC already had its hands on a robotic bunny, developed by Steve Yohannon which partially simulates an actual pet, complete with a pulse and ears which can stiffen or relax. However, interactions are currently tracked with a bunch of biofeedback wires attached to test subjects, which can clearly interfere with their comfort and stress levels.

In order to eliminate that variable, grad student Anna Flagg is developing something they’re calling “Smart Fur” which can actually sense things like being pet, scratched, and other touch gestures. It can even sense breath. They’re hoping the technology can be used to detect the emotional state of the individual interacting with the robo-bunny, so they can determine if robotic pets could actually help people in the same way as a real pet.

At this point, they’ve only got a small swatch of the furry sensor fabric, but the plan is to integrate the fur into the robotic rabbit so they can conduct testing with children and see if the fur-covered robo-pet could be beneficial to them.