Well, now we have some more footage from Star Wars Kinect. When we first took a look at this game I jokingly said that I might have to buy it because it features Slave Leia dancing in Jabba’s palace. Please believe me when I say that this game now looks amazingly awful. 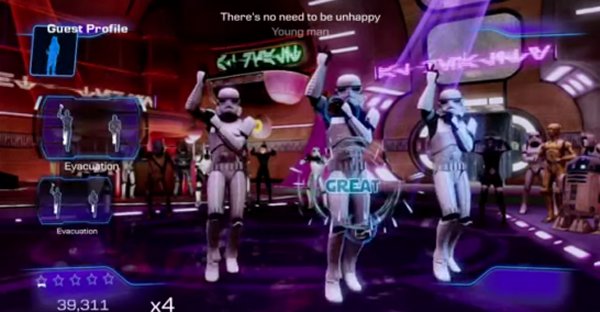 In this latest “B-Roll” footage from Microsoft, we see more of the pod racing, lightsaber battles and dancing. Never mind how stupid the kids playing the game look. Once again, the dancing is super terrible, and this time it makes a mockery out of hard-working Imperial Stormtroopers, who are dancing to a bad remake of YMCA.

The one in front is an Officer, for god’s sake. R2 and C-3PO are in the background again. R2 should know better too, though we would expect this to be 3PO’s scene. And why must their crotches explode with light? I’ve officially decided that this game just should not exist.

[via Topless Robot via Geekosystem]