Admit it Japan – you really are working on making giant mecha and super robots real. You started off with life-size robot statues. Now you’re working on scaffolding that can be programmed to change shapes and volume? Isn’t that what happens when oh I don’t know, an elementary school transforms into a command center? Or when five comically shaped vehicles volt in? Or when Tokyo-3 braces for battle? I got my eyes on you guys. Please let me in on your program. 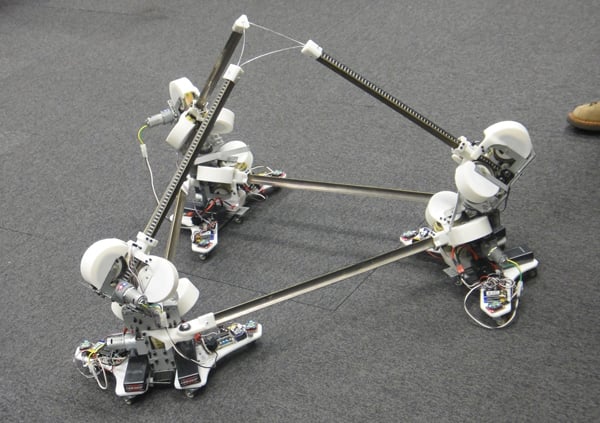 Built by the folks at the University of Tokyo’s Naemura Lab, the MorPhys system is a tetrahedron with actuators that can expand or contract the length of its sides. If that sounds confusing, think of the telescoping rods in tripods, tent poles and other objects. The MorPhys is like that, except its 3D structure allows for a maximum volume that is not dependent on the original, contracted state, allowing for more complicated transformations. Like, you can have a building that becomes smaller, perhaps to be more stable and better resistant to earthquakes. Or a theater stage that doesn’t just stay flat but can have hills and valleys. Or a train that transforms into a robot. My eyes. On you. Japan.

So what’s next guys? Are you training kids to pilot robots? I hope you at least have a reasonable age limit and are treating your test subjects humanely. Because I’d like to sign up.