I hate spiders. They’re gross looking and even the ones that I know aren’t poisonous I still find extremely disturbing. Growing up in rural area, I spent plenty of time in the woods as a kid and have distinct memories of trying to peel spider webs out of my hair while imagining an angry, homeless spider is hiding just behind my ear waiting to crawl into my brain. Spider silk is some sticky stuff. It turns out that in the future, spider silk may be used inside electronic devices to help dissipate heat. 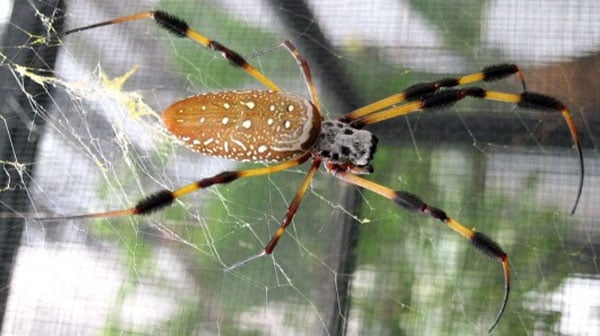 A Japanese mechanical engineer named Xinwei Wang has been investigating spider silk from a spider called the Golden Silk Orbweaver that is known for making complicated webs. The engineer was testing the spider silk for external connectivity and discovered that it is about 800 times more effective at conducting thermal energy than any other organic material tested.

In fact, it was better than almost all non-organic materials tested including copper, iron, and silicon. Another interesting factoid is that the research team discovered that by stretching the silk to 20% of its capacity, thermal conductivity also increased by 20%. Typically, when material is stretched it loses thermal conductivity. There are no plans to use this spider silk for making electronics right now, but in the future spiders webs inside your computer could be there to keep your PC cool rather than because you don’t keep it clean.