Growing up in the infamous Tornado Alley in Texas, we learned from an early age what to do and what not to do if a tornado is coming your way. You also learn what a tornado looks like and the sort of devastation they can leave behind as well. NASA has shown off a really cool picture that was snapped by the Mars Reconnaissance Orbiter of a dust devil, which is similar to a tornado. 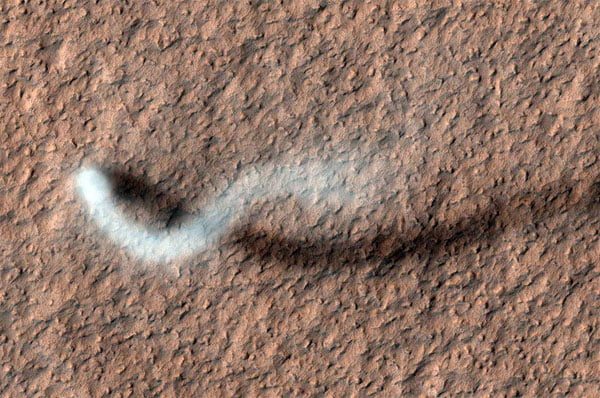 The photo looks a bit like a fire or white worm of some sort, but it’s actually a picture of a dust devil raging on the surface of the red planet. The raging winds pushed a column of dust more than half a mile in the atmosphere. Martian dust devils are very similar to those on Earth and are powered by spinning columns of air.

The difference between a tornado and a dust devil comes in when they form. A dust devil forms on a clear day and is caused by the sun hitting the ground. Tornadoes, on the other hand occur during storms when winds are high. This Martian dust devil measured more than half a mile high, and has a massive shadow as you can see from the image. I wonder how wide its path was.