For years, Volvo has been at the forefront of automotive safety technology. Wwhile not everything they develop works flawlessly, this invention seems like a really good idea – especially if you plan on playing Grand Theft Auto or Carmageddon in real life and running down any pedestrians. 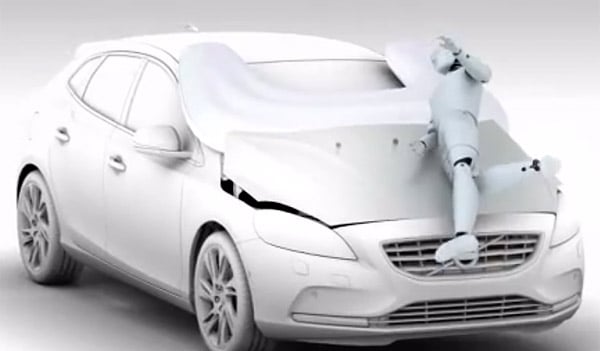 The 2013 Volvo V40 has been outfitted with the first ever production use of Pedestrian Safety Airbags. These special airbags deploy in the event that the vehicle ends up in an unavoidable collision with a pedestrian, potentially protecting both the walker and the driver of the car. The system uses special sensors which automatically recognize pedestrian contact, then fire off a large, wide airbag that covers the lower third of the windshield. It’s also taller along the edges, to reduce the impact against the metal beams along the sides of the windshield.

While it doesn’t really do anything to reduce the initial impact of the front grille, fender and hood, it certainly could reduce the severity of injury – plus make it less likely that they’d end up flying through the windshield. I wonder if it would work with animals crossing the road too. As friends of mine have learned, a 200 pound deer smashing through your windshield isn’t exactly a good thing either.

Personally, I’ve always thought the second your car detects an impending collision, it should deploy a giant protective orb around the vehicle, turning you into an oversize one of those balls you sit on at the gym. Maybe someday that’ll be a standard feature too.