Back to the Future Flying DeLorean Quadrotor: Shut Up and Take My Money!

I just recently ordered myself one of those AR.Drone 2.0 quadrotors to play with, but now that I’ve seen this thing I’m totally jealous. What you’re looking at here isn’t a scene from a movie, it’s a totally custom-built flying quadrocopter built to look like Doc Brown’s DeLorean from Back to the Future. 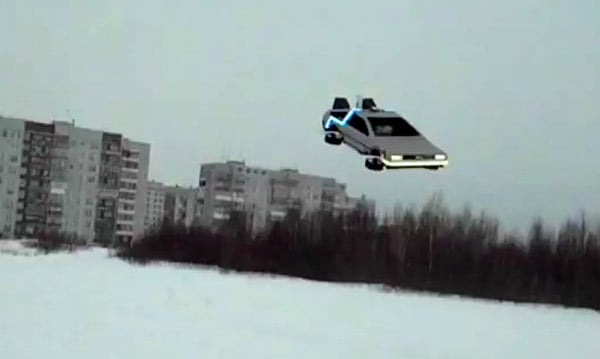 This thing looks exactly like Doc’s ride from the movie, and can hover off the ground quite well, despite the uneven weight distribution of the car body. Clearly, where it’s going, it doesn’t need roads.

And not only does it fly, but it looks awesome, with those LED headlights and taillights, body details and glowing wheels. It’s even got a tiny little Mr. Fusion on the back – though it gets its power from a Lithium Polymer battery. There’s not a lot of details on the thing, other than the fact that its stabilization control is powered by MultiWii, a HobbyKing 12A BlueSeries speed controller, and a batch of Turnigy 2204-14T motors for the engines.

Pictures can’t do it justice, and you really need to see this thing in flight:

Pretty awesome, no? I’ll even forgive him the misspelling of “DeLorian.” I only wish you could walk into a store and buy one of these off the shelf. They’d sell millions. Maybe I can figure out a way to mod a shell for my AR.Dron, but I don’t quite have the model-building skills of the guy who built this.

[via Prosthetic Knowledge via Polkarobot]