I used to think that Dirty Harry packed the most hardcore weapon with his .44 Magnum. I’m not sure if that’s still the most powerful handgun in the world. Probably not. Certainly not after this double barrel semi-automatic. Why shoot one bullet when you can double down? Farmers and other shotgun-toting folk have it right. Two bullets are better than one. 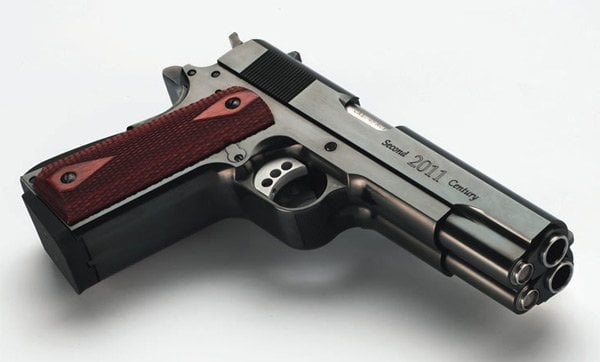 Meet the AF2011-A1 “Second Century” by Arsenal Firearms. It will put two holes in whatever you shoot. This double barrel pistol is pretty beautiful and twice as deadly as your old one shooter. Rest assured that whatever you shoot is going down quickly if it gets hit with two bullets instead of one.

The gun is made in Italy and while I doubt they will be widely available to everyone soon – it seems like they are trying to entice the military and law enforcement with these bad boys. This is awesome and scary at the same time.