Apple has not made their virtual assistant Siri available outside of the iPhone 4S – not on the new Apple TV, not even on the new iPad. But the jailbreak community thinks differently and has come up with a way for older Apple devices to use Siri thanks to two apps: Spire and i4Siri. 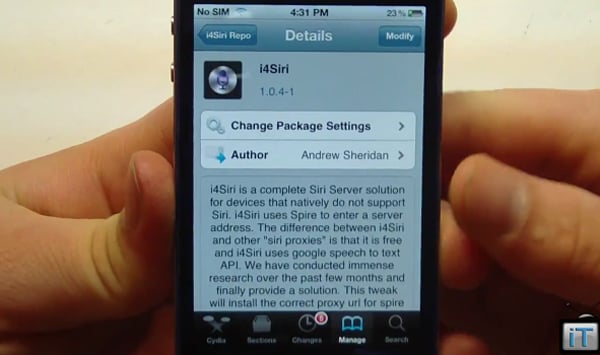 Remember when Grant Paul aka chpwn – one of the developers who hacked Siri into an iPhone 3GS last year – promised a version of Siri that everyone can use? This could be it. Paul and Ryan Petrich – who was also involved in the 3GS Siri hack – wrote Spire, a jailbreak app that downloads Siri from Apple. But having Siri is not enough because only the iPhone 4S can access Apple’s servers. That’s where i4Siri comes in, offering a proxy server that Spire uses to forward traffic indirectly to Apple’s own servers. More in the video below from iTweak.tv (demo of the app at 3:20):

This solution isn’t perfect though; as is the case with Apple’s own servers, i4Siri’s server can and does get overloaded from time to time, so temper your expectations. i4Siri and Spire are both free and are compatible with the iPhone 4, iPhone 3GS, iPod Touch 3G, iPod Touch 4G, iPad and iPad 2 – all jailbroken of course. Note that the new iPad gets neither the real Siri or this unofficial port. Poor guy. No number, no Siri.