I’m not a big watcher of Formula One racing, even though I can appreciate the skill that the drivers have and the speed that the cars are able to achieve as they go blazing around the racetrack. I’d like to race my own car on a road course, but I get really bored watching it on TV. I might check out the F1 season opener in Australia though if for no other reason than to see Heikki Kovalainen and his awesome Angry Birds helmet. 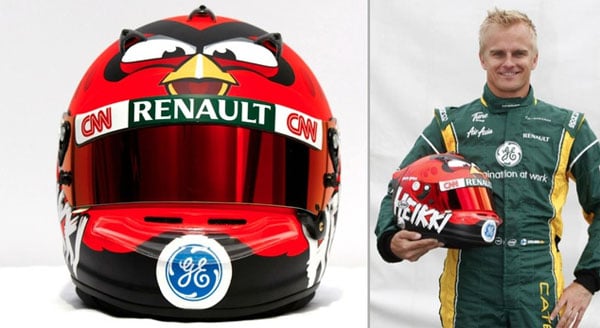 Angry Birds developer Rovio has teamed up with the Formula One team to advertise the game and some of the merchandise will be coming. The helmet the racer will wear at the season opener is painted up to look like the red Angry Bird complete with Heikki’s name written on the side in proper Angry Birds script. I’m not familiar with Heikki at all, but I will say that red helmet doesn’t go particularly well with his green driving suit.

I would like to see Rovio sign up whoever Heikki’s archrival is to wear a green pig helmet. I’d love to see some bird vs. pig action at 200 miles an hour on a racetrack. The marketing tie-in will also include some other items that will be released this spring and Angry Birds levels with a racing team will be coming later as well.