I don’t know why I have such a hard time keeping up the chargers that go with my smartphones. I have an iPhone and an Android device and I can never find the charge cables for either of them. The worst is the iPhone because I charge it on an alarm clock dock. That means I only use use the charger adapter and cable if I’m traveling. When it’s time to go, I inevitably end up digging through every drawer of my desk searching for that dastardly wall adapter. If you have similar charger issue, this new iPhone case on Kickstarter right now is the perfect solution to this problem 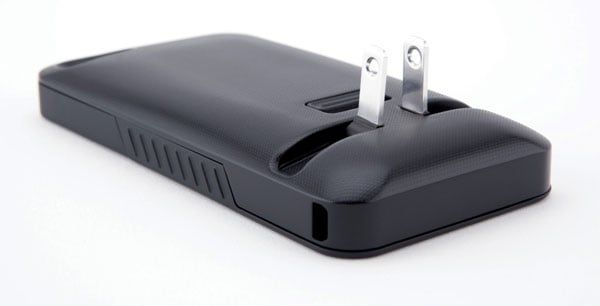 The case, designed by Jesse Pliner and Lloyd Gladstone is called the JuiceTank. It looks like any other hard-shell iPhone case, but has two fold flat prongs for an AC outlet on the back. The prongs lay flat and smooth so they won’t bother you when you’re pulling the phone in and out of your pocket.

When you need to charge on the go or at home, you flip those prongs up and actually plug the case into your AC outlet to charge the smartphone. The only problem I can see is that the plugs are designed specifically for North American 110VAC outlets. If you travel internationally or live elsewhere, you’ll need an international adapter. I also wonder how well it’ll hold into sideways outlets and some of the weird outlet placements you find in hotel rooms.

Still, it’s a slick way to ensure you never have to go looking for a wall adapter or charge cable again. If you want one, you can pre-order yours over at Kickstarter. A limited number of cases are available for a special price of just $40, after which the Kickstarter price jumps to $55. Either way, it’s a good deal when you consider the retail price will be $70 after the Kickstarter campaign wraps on May 13th.