According to some online surveys, a delay of a fraction of a second in loading content can be the difference between users visiting a site and not visiting a site. Search giants like Google spend massive sums of money to eek every millisecond of speed out of their servers. In fact, Google goes so far as to design its own servers and networking gear rather than buy off-the-shelf. 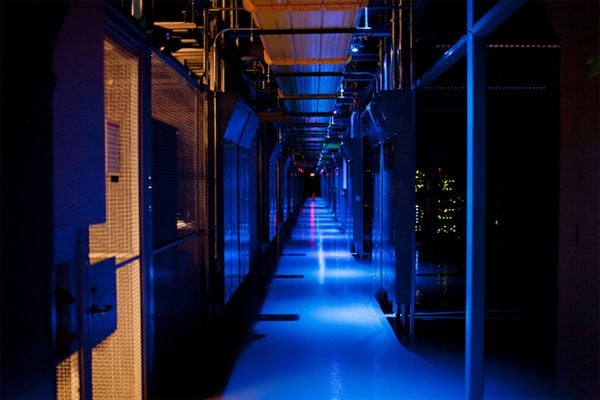 Google has what many consider to be one of the fastest search engines on the web and therefore its proprietary server and networking gear technology is considered to be one of its biggest assets. When you look at it that way, it’s understandable that Google would be very sensitive about the secrets hidden inside its web hardware. So it’s surprising that Google and many of the biggest firms on the web have servers in the same location operated by a company called Equinix. While these facilities are very secure, once you’re out on the floor, it’s easy to peek into anyone’s cage of equipment.

Google is rather paranoid since its competition is literally across the hall, and has taken the light bulbs out of its hardware bays. With no light, the idea is it would make it more difficult for competitors to peek in and glean any hints on how to speed up their own services. How do geeks manage the servers you ask? Apparently, if a system administrator needs to work on site, Google hands out helmets with lights attached to them like a miner would wear when people need to go into the server racks.

What do you think, is this paranoia or pragmatism?