There are many reasons why people switched from wooden houses to cemented ones: they’re more sturdy, a whole lot safer, and can withstand the elements better. But Canadian architect Michael Green is taking a step backwards and will be building a 30-story skyscraper from wood in Vancouver. 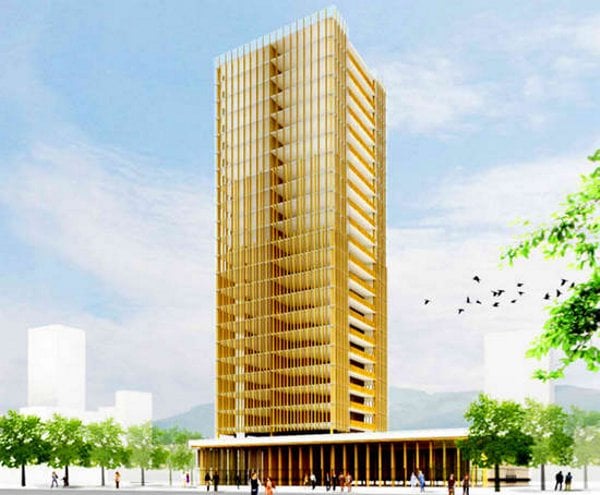 Similar plans for 17- and 20-story buildings that will also be using wood as its main construction material are also being drawn up for Norway and Austria.

Green says: “We think we can go higher than 30 stories. We stopped exploring wood around 100 years ago (with the advent of steel and concrete); now we’re looking at a whole new system using mass timber products.”

The (soon-to-be) literal rise of these wooden structures is the manifestation of environmental-minded architects who want to add a forest-harvested building in the urban skyline. Wooden skyscrapers are greener for the following reasons: they’re constructed using materials obtained from renewable resources, and the wood actually sucks out carbon dioxide from the atmosphere.

When I first heard of wooden skyscrapers, I was thinking of a weak structure that might get blown away by a storm or tornado or catch fire when someone in the building lights a match. However, they will actually be built using laminated timber that is light, strong, well-insulated. Did you also know that large wood beams are actually good at resisting fire, since the exterior will char, but the overall integrity of the structure will reportedly be maintained.

Green adds: “It may sound counter-intuitive, but performing well in a fire is something inherent in large piece of wood, that’s why in forest fires the trees that survive are the largest ones.”