Privly Wants to Protect Your Content, Anywhere on the Web

Remember how social media accelerated the uprising in Egypt last year? Or how it pushed for action against Libya? It all started with a few Tweets and Facebook statuses that eventually sparked others in the network to speak up and rally against the oppressors.

On some levels, it showcased the power of social media. On another, it poses a huge safety issue because someone who didn’t like what you said (or what you’re trying to start) might decide to hunt you down. After all, they have your photos, and they have your general location.

So for whenever you’d want to protect your content, there’s Privly. Or at least, there will be, if enough backers fund their project, which is currently up on Kickstarter. 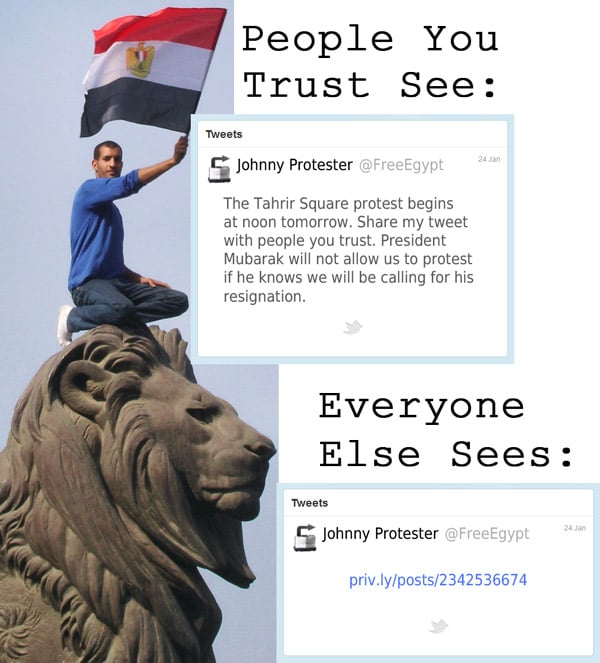 The idea behind Privly is that you never give public websites access to your private content at all. Instead, your content is encrypted, uploaded securely to Privly’s servers, and a special browser plugin decrypts the links and display the content for those you trust. Those you don’t trust will only see a link to the content, but those you do will see the protected content in its place.

If the developers reach their funding goal (which is ten grand), they’ll be able to build an open source encryption library for Privly-type extensions and pull off a few more items from their roadmap, including peer-to-peer networking which would eliminate the risks associated with the centralized storage at Privly.

If you’re concerned about the privacy of content you want to share online, you can make a pledge to show your support for the project on Kickstarter, if you want to.