We’ve seen circuitry that can heal itself. Now there’s a new kind of plastic that can not only heal but “bleed” as well. It has small molecular links that break when it’s cut or scratched, causing a red splotch to appear around the site of the damage. When the plastic is exposed to visible light, the links reform. This isn’t a one-time deal either; the plastic can heal itself multiple times. That’s the 21st century Tupperware guarantee. 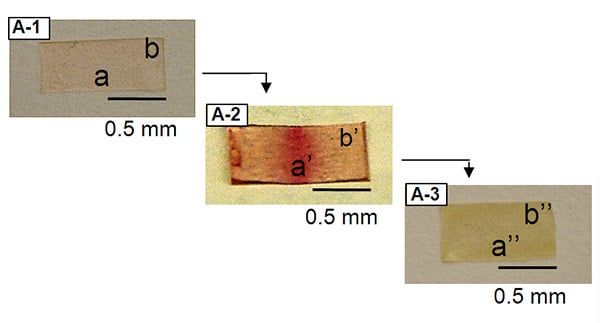 The plastic was developed by researchers at the University of Southern Mississippi led by Dr. Marek Urban. They hope that their discovery will lead to a revolution in manufacturing and repair. Someday minor damage to gadgets or even vehicles could be repaired just by exposing their damaged part to light. The bleeding effect will also serve as a warning so that equipment can be repaired – or at least deemed unusable – before it breaks and causes damage or harm. Perhaps we’ll be more careful with our gadgets if we know that they’ll bleed or get bruises.