Lamborghini Batman Gets Pulled Over

How would you like to be a Gotham cop having to pull over Batman in his Batmobile and report this to Commissioner Gordon? That would suck. Well, that’s not exactly what happened here, but it probably still feels weird to pull over the Dark Knight. 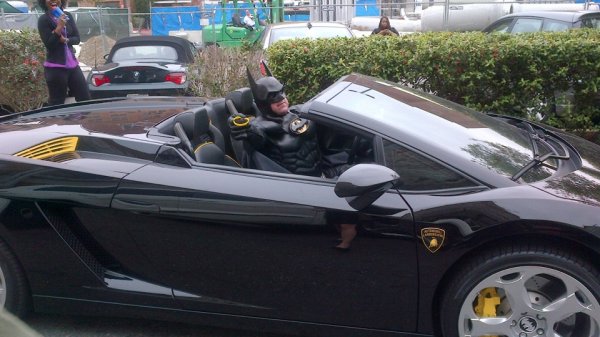 The story is that this anonymous and wealthy philanthropist likes to dress up as Batman and give some sick kids in the hospital special visits. This hero was first spotted a few days ago, all dressed up and being pulled over by Montgomery County Maryland Police. He wasn’t driving a Batmobile, but rather a black convertible Lamborghini Gallardo with yellow detailing. Here’s some footage of Batman cruising in his Lambo that recently went viral:

Apparently his car did not have plates on it. He allegedly had the plates in the car, but couldn’t make them fit in the Lamboghini’s plateholder. I wouldn’t have busted the Batman. This guy is awesome, spreading cheer to kids who need it badly. I wish we had more humans like this guy.

[via Jalopnik via Geeks Are Sexy]