NASA always has an eye on the Sun and other parts of the solar system just in case something cool happens. Turns out that NASA caught a very cool phenomenon back in September of 2011. The space agency recorded a video of that appears to be a gigantic solar tornado using the Solar Dynamics Observatory. 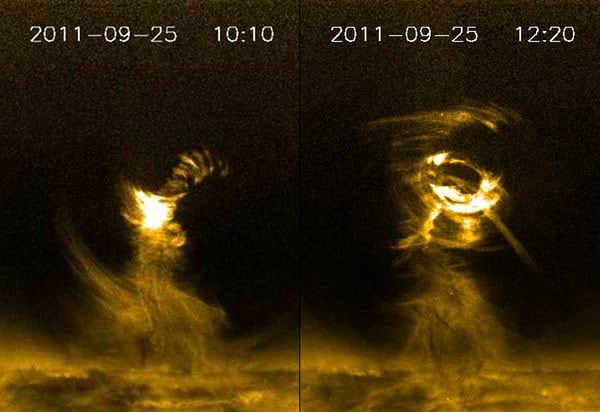 The massive solar tornado was big enough to have swallowed 100 Earths. The tornado is actually known as a solar prominence and they have been seen on the sun for decades but this was the largest ever seen. Astronomers have calculated that the storm was an astounding 124,000 miles tall. Watch the spiraling movement of this impressive solar phenomenon in the video clip below:

Rather than being caused by winds like tornadoes on Earth, the solar prominence was caused by a spiral shaped magnetic structure that rises from the sun and is attached at both ends to the surface of the sun. The solar tornado starts with a huge injection of plasma that shoots up one of those structure’s legs. The plasma is guided along the helical shape of the magnetic structure giving it a coherent rotation of material, in turn causing the massive solar tornado. One of the more interesting parts is that this solar tornado didn’t produce any plasma eruptions, which generally happens.