Canon has unveiled a new DSLR camera that is designed specifically to allow astronomers to take better pictures. The camera has a modified infrared filter and low noise sensor with heightened hydrogen-alpha sensitivity. 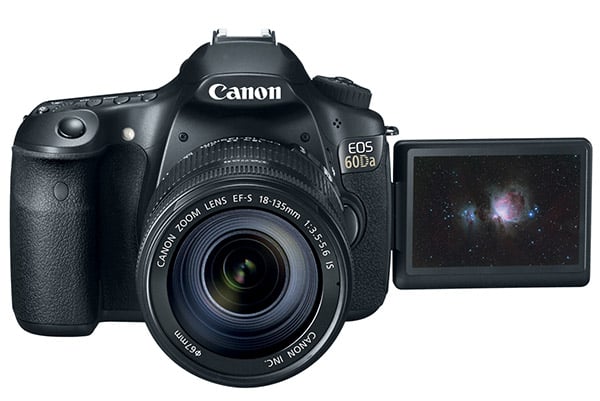 What that means is the camera is able to capture much more accurate photos of things such as “red hydrogen emission” nebula and other celestial bodies.

Like the standard EOS 60D, the Canon EOS 60Da camera has an 18MP CMOS sensor that is sharp and offers good contrast.  Its rear LCD is a three-inch clear view unit with 1,040,000-dot resolution. The display can flip out and is adjustable for angle making it easy to view no matter how positioned. The camera also ships with a stereo AV video cable output images directly to the TV screen for viewing, though it’s unclear if there’s an HDMI port or not. Given the fact that the 60D has HDMI, I’d expect the 60Da to include it as well.

The camera can handle ISO speeds up to 6400 – with the ability to expand to ISO 12800. It has nine different autofocus points, full manual controls, you can store images in RAW, JPEG, and RAW plus JPEG formats. An optional remote accessory is available for controlling longer exposure times. The camera MSRP is $1499, presumably for the body only and it will be available later this month. That’s more than $500 higher than a stock EOS 60D, so you’ll definitely want to wait for some reviews to come out before taking the plunge on this one.