You might remember the interactive music poster that can play short music recordings to advertise bands for a concert or event. There’s no music involved this time, though; rather, all that’s on the screen is a girl – who’s waiting for your kiss. 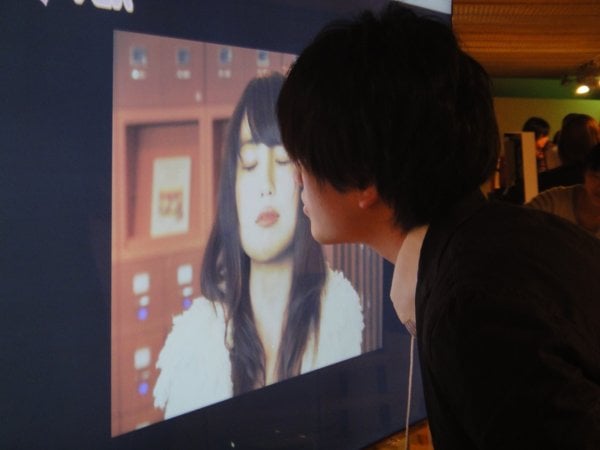 Researchers have developed a “poster” equipped with a distance sensor that makes the image in the photo react when it is kissed. Ok, it’s not really a poster at all – it’s just a flat screen display.

The system was developed by a research group at Keio University, who are still thinking of how it can be used commercially.

This system is very simple. There’s an ultrasound sensor here, to detect how far away your head is. As you approach the sensor, the picture changes. When you get closer, the picture becomes a kissing face, and when you move away, it becomes a blushing face.

The research team are still coming up with ways to improve their system and are looking to create an iPad app that works in a similar fashion in the future.

The current system only produces visual changes, but we could also include the scent of shampoo from the person’s hair, or a lemon-flavored film on the lips, or a speaker that whispers ‘I love you.’ People who’ve tried this system advised us to do those things, so we think there’s still plenty to be done. We’ve learned a lot from talking to users.

It seems like interactive posters might soon take over the world, although you can give the technology a couple of years or so before it catches on.