Man evolved from apes. This isn’t new information, since the theory of evolution was drilled into our heads early on in school. And even though we’re just a few chromosomes different from these apes, the differences are massive. Apes look different, they act different, and they communicate differently as well. But the intelligence of these primates is advanced, compared to that of other animals.

In recent years, scientists have found new and improved ways to interact and “speak” with apes, through the use of laptops, computer screens and even iPads. 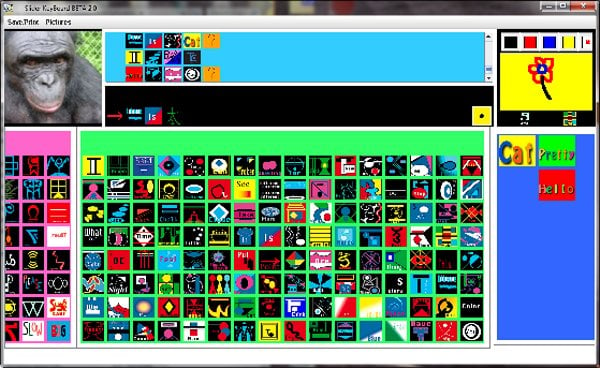 Researchers at the Bonobo Hope Great Ape Trust Sanctuary in Des Moines have developed a variety of custom software in order to communicate with these primates. But they need more funding to make their Bonobo Chat app a reality, and provide each of their apes with personal, interconnected keyboards that they can carry around wherever they go.

They also want to add the ability for the app to automatically translate English speech to Lexigrams that the apes understand, and vice versa. In addition, they want to allow the apes to use the app to interact with their environment, opening doors, operating vending machines and even operating robots. Yes, apes will soon be controlling their own robots from their iPads.

The Bonobo Chat App project is currently up for funding on Kickstarter, with pledges starting at $25.