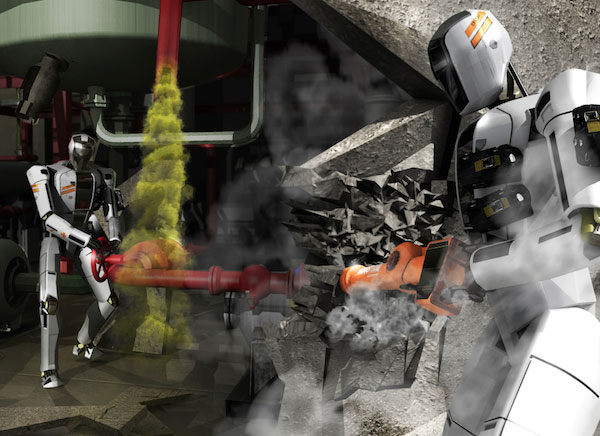 DARPA is offering tens of millions of dollars in funding to teams anywhere in the world that are willing to build robots capable of performing the complicated tasks the challenge offers. The winner of the contest will get $2 million in cash. As I mentioned before, the robots have to be able to complete a series of complicated steps simulating a robot helping in the event of an industrial disaster. The robot has to be able to open doors, walk through rubble-strewn walls, and turn valves in addition other tasks.

The program is looking to develop the robotics hardware itself and open-source software simulations as well. The official goal of the contest according to DARPA is to “develop ground robotic capabilities to execute complex tasks in dangerous, degraded, human-engineered environments.” Key robotic technologies the program aims to advance include “supervised autonomy, mounted mobility, dismounted mobility, dexterity, strength, and platform endurance.”

The program has two phases in the competitive challenge. The first phase spans 15 months ranging from October 1, 2012 to December 31, 2013, while the second phase will last for 12 months kicking off January 1, 2014 to December 31, 2014. The cash purse will be awarded to the winner at the end of the second challenge. There are a variety of Tracks running during the program, with a handful of participants being selected for up to $3 million in funding, while other Tracks will receive smaller amounts of funding for development of software only, or those who wish to fund their own entries. Teams without hardware may be able to leverage a DARPA-provided platform robot but will still have to develop the control software to put the robot through its paces.

DARPA plans on holding an online Proposers’ Day workshop on April 16th to provide more info for potential participants, and you can find out more specifics on the Robotics Challenge here.