DARPA Robot Climbs Stairs Like a Boss, Another Does More Pushups Than I Can

Hot on the heels of the announcement of the DARPA Robotics Challenge, it’s looking more and more like Boston Dynamics will be a shoe-in for the competition with its latest bi-pedal robots. A recently released video clip shows DARPA and Boston Dynamics bipedal robots climbing stairs, walking on a treadmill and doing pushups. 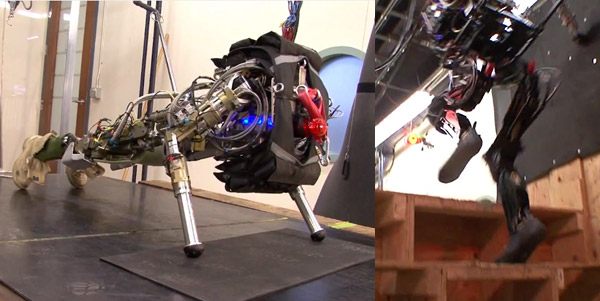 DARPA plans on releasing a modified version of these robots as a platform for those participating in the Robotics Challenge but are using the government-funded equipment option. It’s expected that the final version of the platform robot will be a complete humanoid, with two arms, two legs, a torso, and a head. But even without all of those body parts, the robots shown in this clip are damned impressive.

Those slow-mo sound effects of the climbing ‘bot are going to give me nightmares. Still, it’s pretty amazing to see that we’re on the verge of full-size humanoid robots that can walk, climb and even perform exercises just like us. I also like that these robots are wearing shoes. Now, drop and give me 20, PETMAN!