Astronaut Ice Cream Sandwiches: In Space, No One Can Hear You Ice Cream

Like ice cream, but don’t have a freezer or cooler handy to keep it from melting? Despite the frigid temperatures outside their space ships, astronauts face the same dilemma. Hence, the existence of freeze-dried ice cream for astronauts. 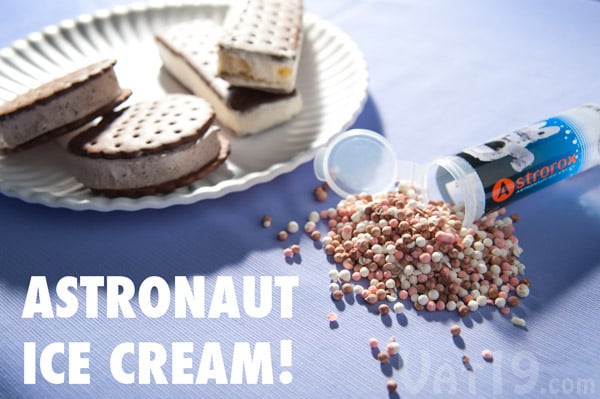 The guys over at Vat19 are now stocking three different types of astronauts ice cream, including AstroRox, which are like freeze-dried Dippin’ Dots, and two varieties of ice cream sandwich. While I’d fully expect that astronaut ice cream would look like Dippin’ Dots, the fully-formed, ice cream sammies are a surprise to me. They look just like they do when frozen, but you can eat them without refrigeration, and they never melt. Keep in mind that since they’re freeze-dried, they’re pretty fragile, so don’t go tossing them around unless you want to end up with ice cream shard-wiches.

While I haven’t personally tasted any of these, they are made using real ice cream ingredients, and I’ve been told they actually taste pretty decent (at least in a pinch). The AstroRox taste like neopolitan ice cream, while the ice cream sandwiches come in vanilla or cookies and creme flavors. What, no Cherry Garcia or Chunky Monkey? Damn. Still, I’m pretty sure Ben & Jerry’s doesn’t have a 3 year shelf life like these do. At least I now have something I’d actually eat in my zombie-proof shelter.