This post is titled the world’s first lickable wallpaper, but most of us know that we can just lick normal wallpaper just as easily.  The only difference is it tastes like nothing and you have a smaller chance of getting a disease.  Why?  Because nobody licks normal wallpaper.  This new lickable, cake-flavored wallpaper that can be found in a London elevator?  Everybody licks that, and you know some of those people have diseases. 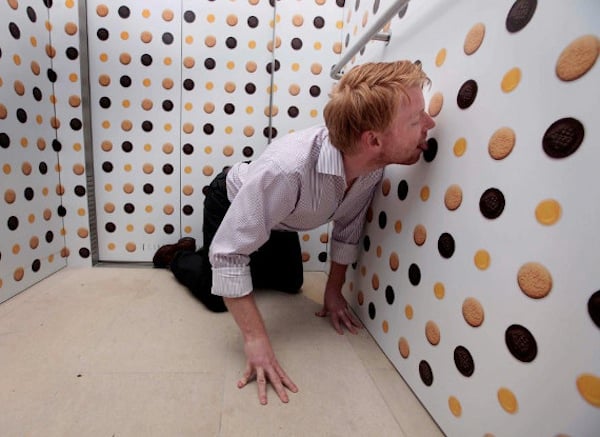 By now, if you’re not satisfied with living in mystery, you’re wondering why there is cake-flavored wallpaper in an elevator.  (Or you’re wondering why there isn’t cake-flavored wallpaper in your workplace, but that answer is for a different time.)  Mcvitie’s Jaffa Cakes, which I have never heard of before, decided to take their advertising scheme to a new level of awesomeness.  What better way to sell their cakes than to have people sample them by licking a wall?  “What?”  Yeah… I’m kind of thinking that there are a lot of better ways to sell people your food, but hey – they got me to write a post about them, didn’t they.  “GULLIBLE.” 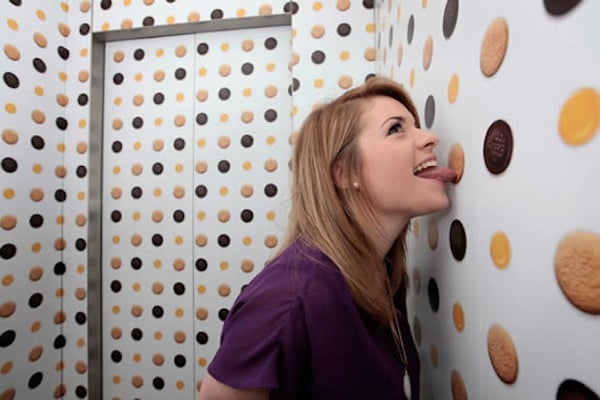 If that woman knew how many people have licked that wall, she would probably think twice.  Or lay down and lick the one on the very bottom, since nobody will have been down there.  “Or everybody else had the same idea, and she would be better off licking at a standard height.”  Maybe she would be better off just keeping her tongue off of the wall.

If you love the lickable wallpaper, you’ll want to check out the LEGO Cake and the Giant Peep Cake, since both of those things are edible, you food monger.