2Pac Hologram May Go on Tour

If you’re a fan of rap music, you may have already heard about the Tupac Shakur “hologram” that was on stage at the Coachella Music Festival in California back over the weekend. That means that the performance wasn’t simply a archival video running from an old performance, rather it’s a synthetic creation. Though it wasn’t an actual hologram, it’s still cool. 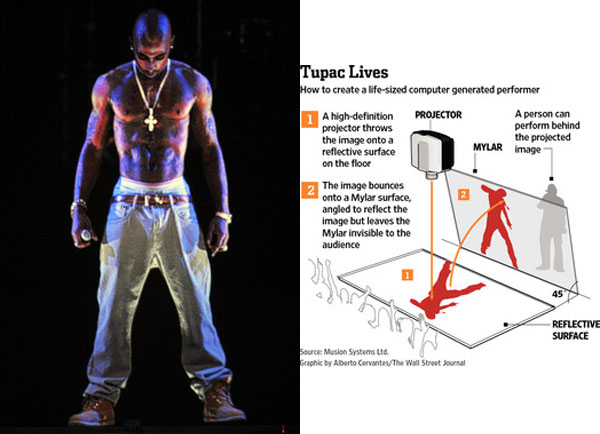 Bringing 2Pac on stage was the idea of Dr. Dre and 2Pac performed a very realistic set on stage with Snoop Dogg and other stars. The company that provided the projectors was called AV Concepts and a CGI studio called Digital Domain actually created the digital 2Pac. Digital Domain is the company that created the CGI effects that brought the young Jeff Bridges to the screen in Tron: Legacy.

The process of projecting the image uses overhead projectors and a thin sheet of reflective mylar film. The illusion was so well received that there is talk of the holographic 2Pac going on tour. There are numerous videos online of the holographic performance, but be warned they contain NSFW lyrics: