Waygoz Connects Players Who Want to Swap Games In Person: Gamestop Says What?

Stores like Gamestop and Best Buy make a ton of money from buying and selling used games, but a new service called Waygoz wants to cut out these middlemen by linking gamers to who want to swap games with each other. So yes, it’s another middleman, but Waygoz is a free middleman, and isn’t that the best kind of any man? 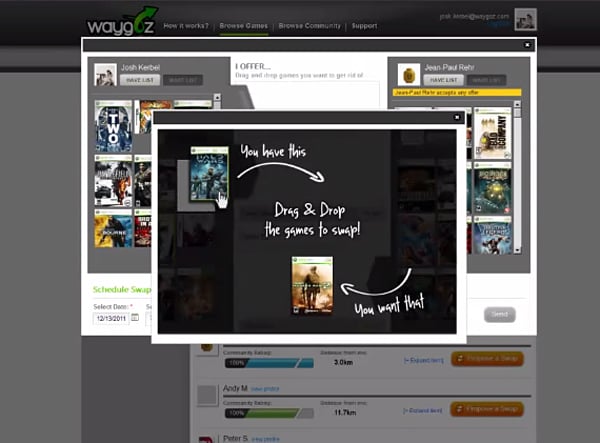 Obviously you can already use social networks, videogame forums and other online means of communication to look for fellow swappers, but two things that they don’t have is Waygoz’ list of swappers and Swap-o-Matic. The benefit of having a list of swappers is obvious: you can see at a glance which members are near your area and what games they are offering or looking for. There are also member reputation ratings similar to the one on eBay.

Once you’ve found someone you’d like to trade with, the Swap-o-Matic drag-and-drop interface will organize the logistics of the meet up, even going so far as to suggest a public meeting place so you don’t end up prompting MSNBC to restart To Catch a Predator.

Meeting people in person to swap games takes more work than simply ordering from a store or online, but with this method you get to meet people in person, encouraging you to form a social network in real life! How about that? After several uses maybe you’ll have gathered enough contacts that you won’t need to use Waygoz again, and in fact will start your own used games service. No. Don’t do that. Do head to Waygoz to try the service. It’s free but it requires a Facebook login.

It’s not clear how Waygoz plans on making money, but hopefully they’ll do it with advertising instead of adding some sort of transaction fees and acting like other middlemen.