If you enjoy music and have a bunch of old floppy drives lying around, why not turn them into an instrument of sorts. For instance, you’ve probably always wanted to hear the James Bond theme played by some old floppy drives, right? Well, here is your chance to see and hear it. 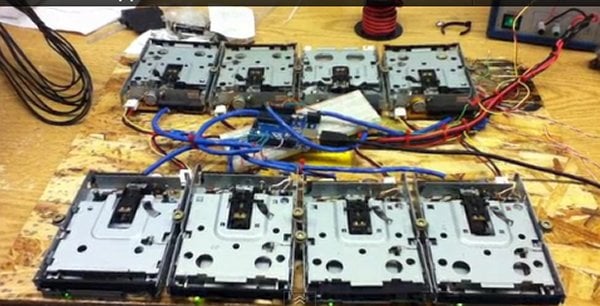 In this video you will see not one, not two, not even a trio of old floppy drives playing the 007 theme, but eight. This project was built for display at Purdue University for the Association of Electrical Technologists club during their Technology Week.

It sounds awesome. In fact, it’s exactly how I imagine a cyberpunk James Bond theme would sound. There isn’t anything floppy about this tune. Put this in the new Bond movie now! It could be the work of some laughing DIY villain and is the perfect way to start the movie.