I’ve never been forced to run from a zombie horde before, but I’ve long suspected that there are two places where you will find yourself in dire circumstances eventually. The first is getting fuel for your car and second is trying to find a place to go to the bathroom. Chevrolet has a funny commercial it is using as a tie-in for promotion of the launch this week of the videogame based on The Walking Dead. 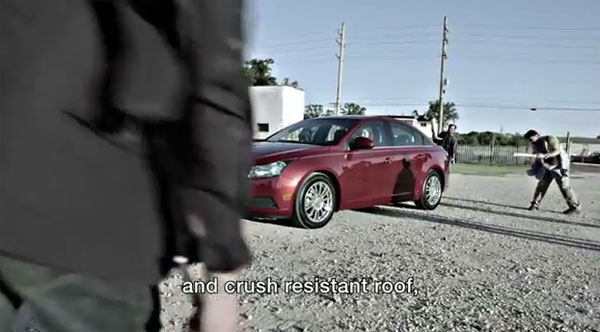 Chevrolet has promoted the commercial as the 2012 Chevy Cruze being the car most feared by zombies. The reason they fear it has nothing to do with spinning blades of death or anything else that might kill zombies. Rather zombies fear the car for its fuel efficiency.

The commercial has a newscaster interviewing some zombies asking them what really gets under their skin. The zombie in the interview starts talking about things that bother the undead including mannequins, flossing, and of course, the Chevy Cruze. Check out commercial for yourself, it’s pretty funny.