I think like most kids from the 80s, I had a fascination with pirates and wooden sailing ships well before Johnny Depp made pirates cool for the masses. One of the first times I can remember watching a film with pirates was The Goonies and their search for pirate gold on One Eyed Willy’s ship. For those of you who love pirates as much as me, a guy named Barney Main (aka SlyOwl) has created an incredibly detailed LEGO diorama of a battle between a pirate ship and the crown. 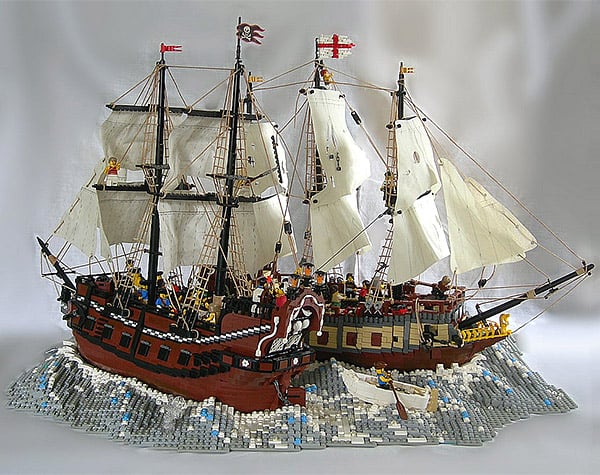 The most impressive thing about the build to me is the LEGO brick ocean. I can only imagine how many little gray bricks it took to create the very realistic waves and splashes in the ocean. You can almost see the water moving under the ships. Other than the sails and the ropes, it looks like the entire scene was made from LEGO bricks. Even the flags appear to be made from LEGO.

I think this is the coolest LEGO project I’ve seen with a nautical theme. This is one of those builds were you can look at the details for a long time and never see them all. Let’s hope that SlyOwl shares more detailed pictures for us to ogle over.