Did NASA Photograph a UFO near the Sun?

Earlier this year a photograph was circulated online that was taken by NASA that some thought showed a UFO. The photograph was later disproven and artifacts caused by reflected light from Venus. A similar photograph has surfaced that has UFO fans thinking NASA has again snapped a picture of a spaceship near our sun. 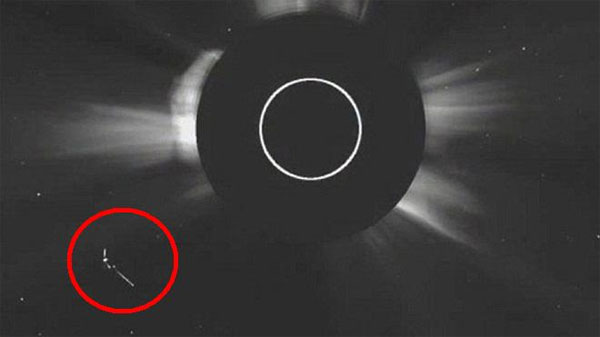 In the photo here, you can see in the red area what appears to be a jointed ship hovering near the sun. Some believe it’s a UFO refueling, while others claim it’s nothing but another artifact caused by peculiar conditions in space. Nathan Rich, lead ground systems engineer at the United States Naval Research Laboratory says that what some believe is a spaceship is nothing more than a collection of streaks left behind by cosmic rays as they traveled through the sensor of the satellite that took the photos.

The photo was taken by NASA’s Solar and Heliosphereic Observatory (SOHO) earlier this week. “The streaks in question are consistent with energetic particle (proton) impacts on the CCD, something which is apparent in just about every image,” Rich said. He believes the UFO is nothing more than an electric charge left in the pixels of the camera the cosmic rays penetrated. What do you think?