Handheld weapon maker Patrick Priebe aka AnselmoFanZero is back with another laserrific armament. It’s a revolver with a design inspired by the Settler Pistol from the FPS game Rage, but with less grime and more brass. Also, instead of bullets, it’s loaded with a battery and fires a laser beam. 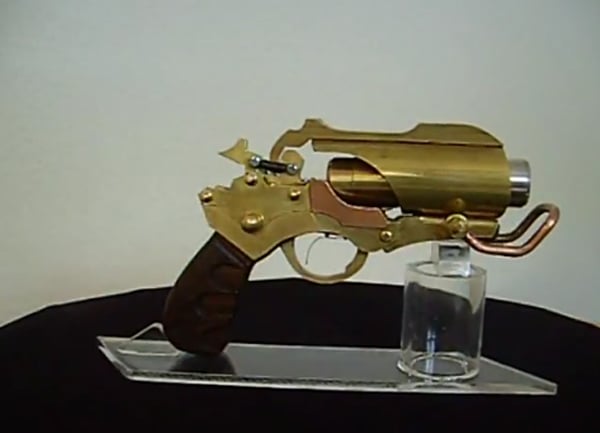 I love how the guns’ barrel acts as its battery compartment. I don’t love the laser. It’s BRIGHT. Seriously you might want to wear goggles just for the video. You definitely should wear goggles when firing this pistol because it has a 1.5W blue laser, enough to instantly blind eyes and burn skin.

Priebe said he sold the unit shown in the video for €600 (~$790 USD), but he can also make a “slightly simpler version” for less. I wonder what he’ll make for $5. A drawing of the gun perhaps? If you have more money than I do, just drop him a line on YouTube or Facebook. Also give me some of your riches.