Well, it didn’t take long for that to happen. This lemon shark is an actual shark with a laser attached to it’s dorsal fin. But it wasn’t created by an evil genius or super villain. It is the work of Wicked Lasers. As if sharks weren’t scary enough. 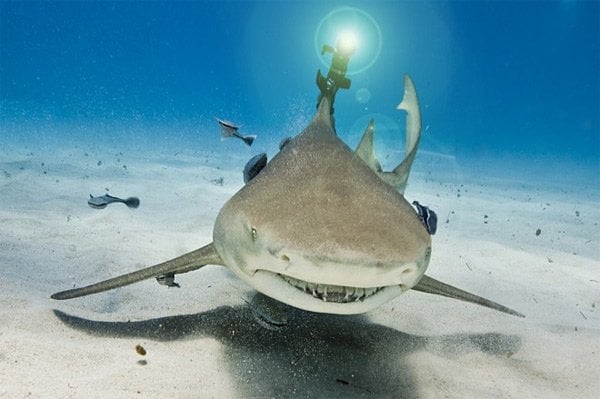 They attached a 50mw green laser to it’s dorsal fin using a temporary clamp, so don’t worry, the animal was not harmed. Wicked Lasers pulled this off with the help of celebrity marine biologist Luke Tipple. Or should I say fin? They didn’t do this for Dr. Evil, but more as a publicity stunt.

“This was definitely a world first,” Tipple told Wired. “Initially, I told them no. I thought it was a frivolous stunt. But then I considered that it would give us an opportunity to test our clips and attachments, and whatever is attached to that clip, I really don’t care. It was a low-powered laser that couldn’t be dangerous to anyone, and there’s actually useful application of having a laser attached to the animal.”

The lemon shark was chosen because it has predictable behavior and isn’t quite so aggressive. Let’s just stop there. No more arming sharks with lasers. Next it will be octopi with a laser for each tentacle. Things could get ugly.

[via Wired via Obvious Winner]