So you have a kick ass home theater setup, with a 72″ 3D HDTV as its centerpiece. I applaud your fat wallet. But if you want to keep being a great consumer, keep an eye on this new technology: a 145-inch Ultra High Definition plasma display. Either that or this is a picture of a 32″ HDTV and a very small lady. 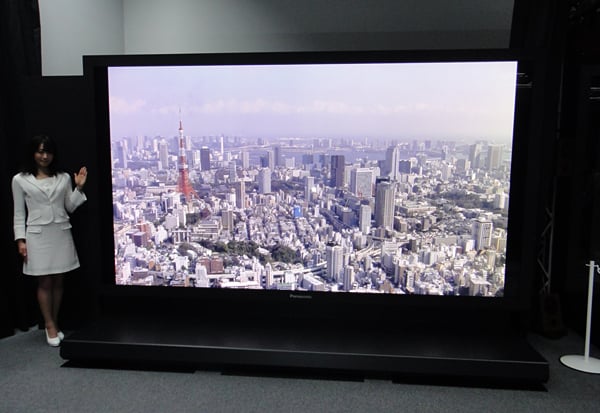 Made by NHK and Panasonic, the display has a maximum resolution of 7,860 x 4,320, has almost 34 million pixels and other numbers bigger than the ones that your TV has. It also has “a new drive system to stabilize the picture throughout the panel, by scanning several pixels simultaneously in the vertical direction.”

I predict that in a hundred years, Sony will partner with ImprovEverywhere to bring us Liv3Theatr, an Ultra Hyper Mega 26-Hit Combo Finish High Definition Display that looks so real because it is real. Pick a channel and Sony will teleport improv actors behind your display to perform whatever show is on that channel or teleport you to where the show is being held. If you can find the remote.