I’m a big road racing fan and have played just about every racing video game out there. I particularly enjoy playing the full-on motion simulators when I’m at special events or arcades cool enough to have one. A true motion simulator can make you feel like you really are behind the wheel of the car. 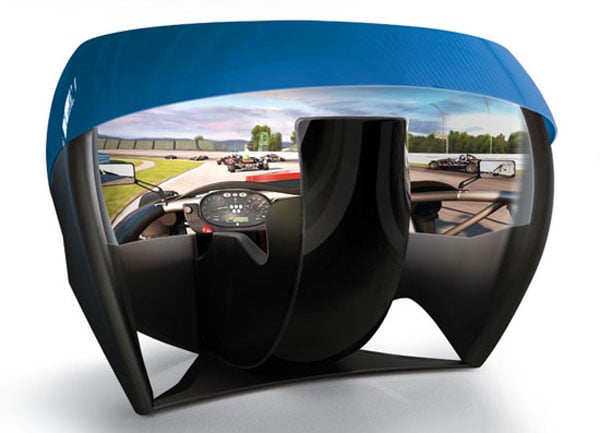 A company called Motion Simulation has created a portable 180-degree spherical projection screen and race seat. The base model is called the TL1 and uses three projectors and computer to shoot the game or simulation onto the curved, seamless screen. The motion simulator can be fitted with optional transducers to allow the driver to feel bumps in the road. I would assume it also has force feedback steering.

The system uses a chair that has adjustable driving position and the simulator can be used for flight games as well. The computer can be any Windows XP or 7 desktop with the power to handle three displays, and a total 5760 x 1200 resolution. Sadly, the base model alone is over $18,500, and a fully-outfitted simulator with three projectors, moving cockpit floor, and a high-end PC ranges from $26,000 to $55,000, so it won’t be at my house anytime soon.