One of the coolest things you can do with a high-powered laser pointer is to burn small objects and pop things. Those lasers are sort of like high-tech magnifying glasses from back in the day. One geek has taken one of the Spyder III lasers from Wicked Lasers and set out to break a world record. 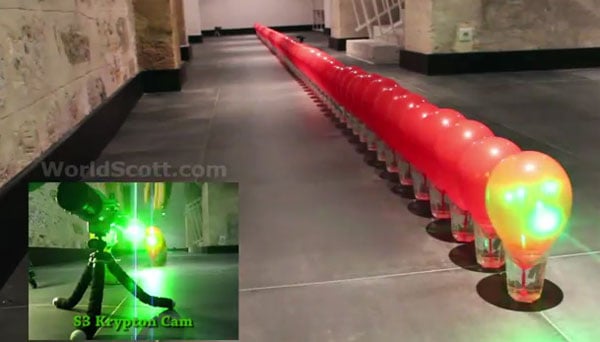 Youtuber WorldScott lined up a string of 100 red balloons held down with specially modified glasses of water to keep them from blowing away as balloons pop around them. Once the 100 balloons were set up, the laser was switched on and the beam was fired through what appears to be some sort of magnifying glass. The balloons pop surprisingly quickly, considering how far away some of them are.

The laser used is a Spyder III Krypton in the 750mW – 1000mW power range. The last balloon definitely needed the longest time to explode, but it did eventually go. The video has been submitted to the Guinness Book of World Records to see if it is in fact a world record. Record or not, it was certainly cool. Be sure to check out the video and see it for yourself.