There a lot of people out there that are really into the green movement who thumb their nose at fuel-swilling performance cars. Typically, when we’re talking about something along the lines of a Porsche, fuel economy isn’t mentioned in the same sentence. However, Porsche has a new sports car prototype that not only has very impressive performance; the car also achieves excellent fuel economy. 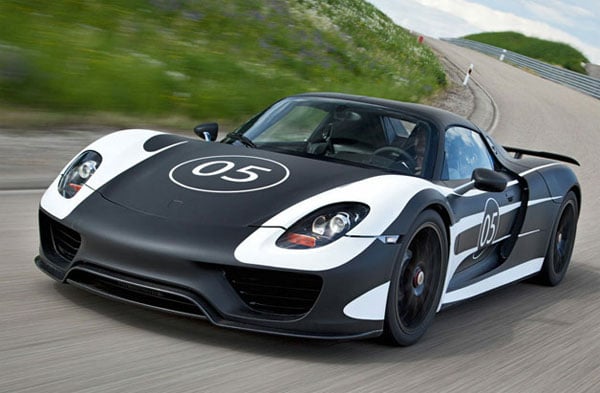 The car is the Porsche 918 Spyder and this sexy beast is a plug-in hybrid. The car uses a traditional four-liter V8 engine producing 500 hp along with a pair of electric motors. The V8 engine propels the back wheels, while each of the front wheels gets its own electric motor making for an all wheel drive vehicle. The car is capable of using the electric power alone to propel itself up to 94 mph. The 918 pushes out an incredible 770 horsepowere when the V8 and electric engines are combined, and consumes 3 liters of fuel for every 100 km driven. Top speed is 199 mph and it can hit 60 mph in 3.1 seconds.

It’s not clear how long the car can drive on electric power alone, but it apparently gets 78 mpg on the EU test cycle. The car you see in the picture here is a prototype wearing black and white camouflage, reminiscent of Porsche 917 racecars from the past. Of course, all of this comes at a price – the 918 Spyder hybrid is expected to sell for $845,000 (USD) when it’s released by the end of 2013.