The gadgets of the future may come with viruses, but not the ones that Norton should be worried about. First of all, they’re actual viruses, not the software kind. Second, they’re good viruses, helping to convert mechanical energy to electricity via piezoelectricity. 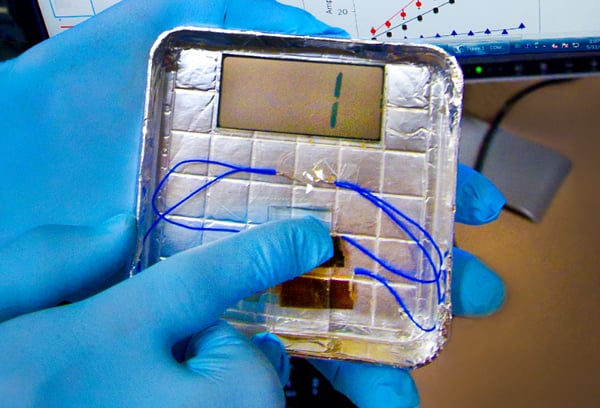 The brown patches in the image above are electrodes coated with genetically modified M13 bacteriophage, a virus that only attacks bacteria and is harmless to humans. When the electrodes are pressed, the viruses convert the force into electricity, as evidenced by the LCD display on top. The setup produces 6 nanoamperes of current and about 400 millivolts, about a quarter of the voltage of a triple-A battery. While there are already numerous piezoelectric technologies available, but Berkeley Labs states that those involve toxic materials and are “difficult to work with.” The modified M13 on the other hand is harmless, self-replicating and arrange themselves into organized films, making them quite promising.

I guess the video doesn’t really explain what’s going on in layman’s terms, but the full article at the Berkeley Lab News Center does have a more understandable breakdown of the research. The takeaway here is that if this virus-powered generators become fully developed, we’ll see more devices such as these that convert what would be otherwise wasted mechanical energy into electricity. Now where are the friendly worms and trojans?