The Microsoft Kinect certainly changed the playing field for gesture-based input devices, though arguably it’s been a cooler tool for interactive experiments and hacking than for gameplay thusfar. Now, a company called Leap Motion thinks they’ve cracked the formula for gesture control on the desktop with their LEAP controller. 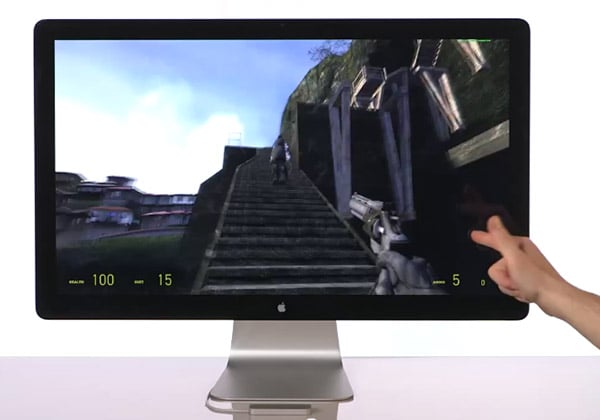 The diminutive LEAP box sits in front of your PC or Mac and plugs into a USB port. It then can detect gestures in 3D with enough precision to measure individual finger movements down to 1/100th of a millimeter.

Here’s a sneak preview video of the LEAP in action:

Not too shabby, eh? I love how you can use objects like pencils or a pen to interact with the screen without touching it, or use your finger as a gun controller for an FPS. Plus, they say you can network multiple LEAPs together to create larger areas for interaction. Though at this point it can only detect hands and small objects, not entire bodies like the Kinect. Then again, do you really want to stand up to use your PC? Perhaps the best news is that the LEAP is going to sell for just $69.99 (USD) – or at least that’s the pre-order price.

About the only downside is that at this point, there’s no word on when the LEAP will hit the market – but if you’re willing to take a risk on what looks like a very promising technology – you can pre-order one now. They say they won’t charge your card until it ships.

If you’re interested in some more extensive demo footage of the LEAP, check out the video below: