I use my iPhone quite a bit, and I know that many people use it to also create tunes. Now you can have a guitar which integrates an iPhone dock, and it’s fully powered by the phone, making it the ultimate iGuitar. I’m not sure, but it’s definitely an interesting idea. 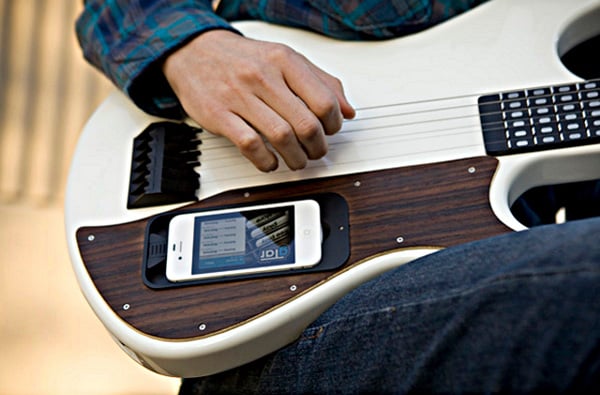 The gTar was launched as a Kickstarter project. It has actual strings, and uses sensors to relay what you are playing to a custom iPhone app, which is supposed to help people learn to play the guitar more easily. The array of integrated LEDs along the fretboard will light up to show you how to play. Each note is relayed to the iPhone, which then produces the sound. There’s even a feature called SmartPlay that mutes incorrect notes. (They could also call this “Cheat mode.”)

It’s more of a learning tool than a replacement for a real guitar, though it does offer a “free play” mode where you can play it once you’ve built up your confidence. In just a couple of days, the project raised the necessary $100,000 to be fully funded. There are still 34 days left. Will it do $10 million like the Pebble smartwatch? You’ll need to pledge at least $399(USD) to get yours (the introductory batch of 200 already sold out for $350.)