I’ve longed for a stylus that was actually good for drawing on my iPad, but after many purchases, I’m still not satisfied. What I really want is something that has a fairly fine tip, but can also produce pressure data. What I really want is to be able to use my iPad as a Wacom tablet – with a screen. The PressurePen may not be the most elegant looking stylus out there, but it does offer the pressure sensitivity part, so my curiosity is piqued for sure. 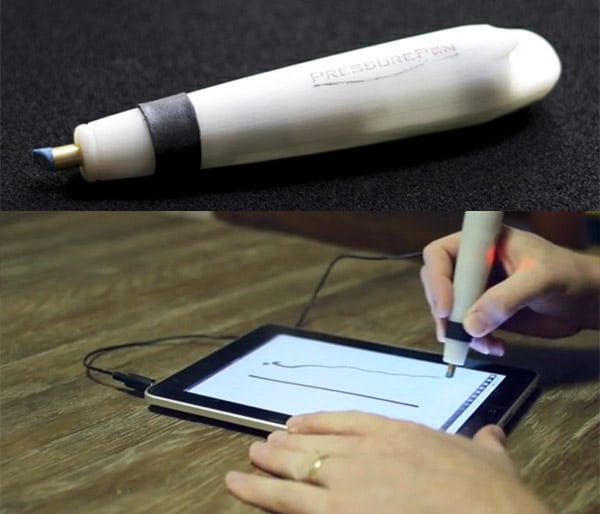 Created by web developer/hardware tinkerer Charles Mangin, the PressurePen uses an audio signal to communicate how hard you’re pressing on the stylus while you draw. Rather than use an audible signal though, it sends data through the iPad’s audio jack to let it know the pressure level, passing at least 1000 levels of pressure information to the tablet. This means that it’s the first tethered stylus I’ve seen. Now that isn’t necessarily a bad thing – you’ll never lose your pen, so long as it’s plugged in.

The chunky looking PressurePen looks more like a fat marker than a skinny technical pen, but I actually think that’s a good idea, since drawing with pens which are too skinny doesn’t feel right either. Trust me, I’ve tried with the iPen – a horribly disappointing device. While the Jaja and Jot Touch pens also promise pressure sensitivity, the Jaja could have issues with audio interference because of the way it works. On the other hand, the Jot Touch uses Bluetooth, so expect it to burn battery for both stylus and iPad. I also HATE the goofy see through plastic tip on both of them. On the other hand, the more simple design of the PressurePen should get the job done, without the battery or interference issues, and it has a chiseled stylus tip that looks pretty usable.

Charles plans on making the PressurePen compatible with Android tablets as well, and will be making both the software and hardware Open Source, so you’ll be able to create your own, or make improvements.

The PressurePen is selling for just $60 (USD) fully assembled, and $30 in kit form (though you have to print your own 3D shell.) If you’re interested in one, head on over to PressurePen’s Kickstarter page and pledge in the next few days. They’re nearing their $10,000 fundraising goal, but need some more orders to push it across the finish line by May 31st.